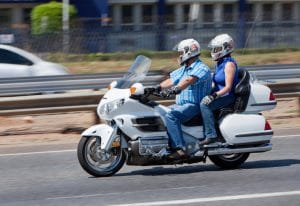 Think you have the right motorcycle insurance coverage? According to the Kentucky State Police in 2016, they were 1,841 wrecks involving motorcycles.  While this is only a small percentage of the total number of car wrecks in Kentucky in 2016.  I try to give a lot of legal advice about motorcycle accidents as they tend to involve the most serious injuries.  As a result, they illustrate the shortcomings of motor vehicle law.

Let’s be clear about an overall, huge principle in regard to motor vehicle law.  The law is such that an at-fault driver is only required to have $25,000 in insurance coverage.  Therefore, regardless of the severity of your injuries and/or which personal injury attorney you may hire, there is no guarantee under Kentucky or Indiana law that the at-fault driver will have enough insurance to fully compensate you for any damages he or she may cause.  Motorcycle accidents tend to be the area of the law wherein this concept is seen the most.

Motorcycle wrecks tend to involve severe injuries as a motorcyclist is exposed to the severity of the impact from the car.  As I have preached on multiple occasions, the way to protect yourself, as a motorcyclist, is to have at least $100,000 per person of underinsured and uninsured motorist coverage on your motorcycle insurance policy.

Motor vehicle policies sometimes contain language excluding uinsured motorist coverage while the injured person is a rider or passenger on a motorcycle. This language may take the form of an actual exclusion, or may come into operation due to a policy definition limiting “automobile” or “car” to four-wheeled vehicles. This is exclusion is reasonable, on the grounds that motorcycle riders are a high risk group who make a conscious decision to limit their coverage by the act of electing to ride a motorcycle.

Now, if I did not lose you just now with a lot of legal-ease, this is the interesting part.  The State Farm case, supra, is a Kentucky Supreme Court case that stated the following in regard to motorcycles and motorcycle insurance:

Thus, the question becomes one of whether the exclusion of the motorcycle from coverage is reasonable, an issue we recently determined in Preferred Risk Mut. Ins. Co. v. Oliver, supra. In that case we said:

“It is common knowledge that motorcycle riders, as a class, are among the highest risk groups conceivable. Motorcycles offer no protection whatsoever from the front, back, sides or top, and leave the rider exposed to every peril of highway travel. The exclusion of such a class from coverage is clearly reasonable where, as here, the assured has the option of avoiding the excluded peril. An assured has no choice in selecting those uninsured motorists who may injure him, but he certainly does elect to ride a motorcycle. This volitional act triggers the exclusion and he accepts the consequences.”

The point being that per the exact words of the Kentucky Supreme Court, Kentucky law considers motorcycles to be a dangerous vehicle and therefore, an insurance company can reasonably exclude coverage for motorcycle accidents from automobile insurance policies.

The lesson for you, as a consumer, is that even though you only use your motorcycle a couple of months a year, you have to make sure your motorcycle insurance policy has the right kind of insurance coverage on it regardless of the cost.  The case law and statutes are making it clear. Kentucky law does not favor the rights of motorcyclists.