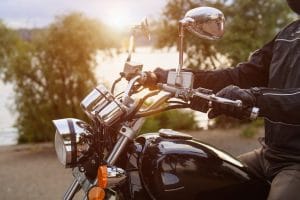 It can be a dangerous world on two wheels! Motorcycle accident injuries exhibit interesting patterns.  The Center for Disease Control (CDC) studies over 1.2 million people who were treated in emergency rooms across the United States for non-fatal motorcycle related injuries and this is what they found.  Injuries to the legs and feet account for 30% of all non-fatal motorcycle injuries.  Next up were head and neck injuries accounting for 22%.  Third were wounds to the chest, shoulders, and back, next were injuries to the arms and hands, and lastly were injuries to the hips and pelvis.

The Association for the Advancement of Automotive Medicine (AAAM) did a study over a four-year period in the state of Maryland where they tracked injuries related to helmet use and differences in injuries sustained by younger and older riders.  This AAAM study used both hospital discharge records as well as police reports.  This study broke injury locations down into nine different areas including the head, chest, abdomen, spine, neck, face, upper extremities, lower extremities, and external skin, which they ranked by severity.

In the helmet versus no helmet portion of their study, helmeted riders had a fewer severe injuries and a greater number of not as severe injuries. Their overall findings (not addressing the differences in age groups) ranked them as follows:

This correlates with the CDC findings, however this study did not take into account helmet use.

A study by the World Health Organization (WHO) studied motorcycle accident victims with their findings also correlating with both the CDC and AAAM studies.  Namely, the majority of injuries occurred to the lower limbs with the tibia and fibula bones being the most commonly broken in the lower extremities with the femur being next.  In the upper extremities the radius and ulna were most commonly broken followed by the humerus.

Obviously, head injuries as a result of a motorcycle accident are lower among those riders wearing a helmet.  Among both helmeted and unhelmeted riders, the leading injury accounting for motorcycle crash fatalities is a head injury.

What can we learn from this?  Safety gear greatly reduces severe injuries and fatalities in the case of a motorcycle accident.  One way to remember this is ATGATT which stands for All The Gear, All The Time!  Enjoy your ride, but be safe and protect yourself!