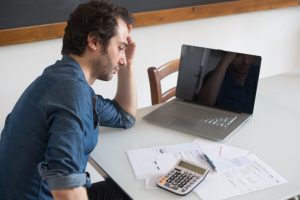 With the onset of Spring, motorcycles are back on the road in Kentucky. In fact, Kentucky has over 100,000 motorcycles registered.  It is estimated that nationwide over 80,000 motorcycle wrecks occur a year.  So how does the injured motorcyclist get his or her medical bills paid when Kentucky law only requires that a driver carry at least $25,000 per person in insurance coverage? It is for this reason that motorcycle accidents pose a bigger challenge than the average personal injury claim.  This is especially true when you consider the impact of health insurance liens.

Before the motorcycle wreck ever occurs, the smart motorcyclist understands that there is no guarantee under Kentucky law that a driver or a vehicle is truly insured and/or that the at-fault driver has enough insurance coverage to cover the medical bills for the injured motorcyclist.  As a result, as soon as that motorcycle hits your driveway, I recommend that you have at least $100,000 per person of uninsured motorist and $100,000 per person of underinsured motorist coverage on your motorcycle insurance policy.

On this issue, I want to make a point that might be easily overlooked.   Your insurance company is going to fight your personal injury claim just as if they insured the at-fault driver.  This is not a get rich quick scheme. Rather, the purchase of uninsured and underinsured motorist insurance makes sure that you are protected in the worst -case scenario ( i.e. the at-fault driver had no insurance or your damages far exceed his insurance coverage).

I have dealt with several cases over the years wherein people lost part of a leg from a motorcycle wreck or had multiple surgeries. This legal advice is trying to make sure your savings plan and the financial planning for your household stay on track even though you were injured in a motorcycle accident that was not your fault.

Nevertheless, the positive aspect of health insurance is that the health insurance carrier has contracts with hospitals and doctors that can reduce your medical bills.  For example, I just dealt with a case last week wherein Anthem paid a hospital $2,800 to satisfy a $16,500 bill.  Anthem has a right to recover the $2,800 they spent, not the full value of the medical bill.  In effect, the reduction provided by health insurance contracts allow you, the injured motorcyclist, to stretch a dollar bill to cover more of the incurred expenses from a motorcycle wreck.

The above-described Anthem illustration also points out one of the ways in which Kentucky law is unfair to motorcyclists.  Kentucky is what is called a no-fault state.  The simplest description of Kentucky’s no-fault laws is that the insurance company for the vehicle you occupy automatically covers your medical bills and lost wages, up to a $10,000 limit.

For example, if you’re standing still at a red light and hit in the rear-end by a drunk driver, your own car insurance is going to be the no-fault carrier, even though you did nothing to cause this car wreck, and once you are done treating, that no-fault carrier will go against the insurance company for the drunk driver to recover the medical expenses paid on your behalf.

Kentucky law goes on to say that in exchange for this right to recover these no-fault benefits, the injured victim gives up the right to recover the first $10,000 of medical expenses and lost wages and it becomes the right of the no-fault carrier.  If you don’t believe me, look up K.R.S. 304.39-060. This is the statute that transfers those rights to the no-fault carrier.  Personal injury lawyers refer to this as the abolition of tort liability.

The problem for motorcyclist operators is that Kentucky law acts like your motorcycle was uninsured and because of the aforementioned “abolition of tort liability”, does not allow you, a motorcycle operator, to recover the first $10,000 of his medical bills or lost wages.

For the motorcyclist, to get around this “abolition of tort liability penalty” has to either purchase the optional no-fault coverage for his motorcycle or use his health insurance to pay his medical expenses.  On the positive side, this abolition of tort liability is controlled by the total charge of the medical expense, not the reduced rate paid by the health insurance. In the Anthem example above, the motorcyclist could recover $6,500 of the emergency room bill (i.e. $16,500 less the $10,000 that could have been paid under no-fault insurance) even though Anthem satisfied that charge for $2,800.

One final point on this issue and how Kentucky law penalizes motorcycle operators.  The Kentucky Motor Vehicle Reparations Act sets out the law in regard to no-fault benefits.  The Kentucky Legislature recently amended KRS 304.39-241 to allow no-fault benefits to be directed towards a health plan’s subrogation claim.  Insurance companies rely on this as another way to ensure payment of their health insurance liens.

If the hospital for this car wreck had submitted that $16,500 emergency room charge to the no-fault carrier, they would have recovered $10,000 from my client’s no-fault carrier and my client would still have owed them another $6,500.  Instead, Anthem reduced that charge to $2,800 making it so that the hospital was not owed any money, the health insurance lien was satisfied out of the no-fault benefits and my client had $7,200 remaining ($10,000 of no-fault benefits less the $2,800 paid to the health plan) in no-fault coverage to go towards her other medical expenses.  The obvious point being that since a motorcycle operator is not entitled to no-fault coverage unless that have purchased optional no-fault benefits, a motorcycle operator cannot use KRS 304.39-241 to satisfy a health insurance subrogation claim.

What does all this mean for a motorcycle rider involved in a serious accident in Kentucky?  Have at least $100,000 per person of uninsured and underinsure motorist coverage on your motorcycle insurance and make sure you and your passengers both have health insurance to cover your medical expenses, including health insurance liens.  With these tools, there is a good chance we can make sure you are not left holding the bag for a bunch of medical expenses that were caused by a negligent driver.

How Do I Protect Myself in These Circumstances?