Does anyone else remember the Yugo? It was a car built by the former Soviet Union in the 1980’s.  Its reliability was so bad that you would have been better off driving a Ford Pinto than buying that car.  Well, no matter they try to claim otherwise, there is no way any personal injury attorney, including the law firms that claim to be so BIG, can make it so that Yugo can win the Indianapolis 500. 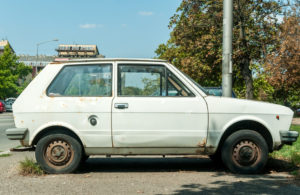 Buying car insurance is like buying an automobile.  If you buy the Yugo, you may save money up front but you will have a whole lot issues with reliability, repairs, etc.  However, that does not mean you need to buy a Mercedes either.  You need a solid insurance policy that will protect you in most circumstances and by doing so, you give your personal injury attorney something good to work with. It does not have to be perfect insurance all the time but rather, it just has to be good enough so that we, car accident lawyers, have the means of keeping you from going backwards for a car wreck that was not your fault.

You see, as much as the critics want to claim that we are just a bunch of ambulance chasers and car wrecks are just a get rich quick scheme, the real goal of any good personal injury lawyer should be keeping their client from suffering financial hardship from a car accident that was not their fault.

Well, if you have read my blogs previously, you know that I like to rant and the chances are that this blog stems from a situation frustrating my client and me.  This time, we are dealing with a three car, pile-up wherein my client is being accused of not stopping his vehicle in time; even though he was hit in the rear end and pushed into the vehicle at the front of the line.

Recall that Kentucky is a pure comparative fault state which means in a car accident case, that fault can be divided among the drivers anyway a jury wants to as long as the total adds up to 100%. In this case, the insurance company is arguing that they don’t owe 50% of the damages as those damages, allegedly, stemming from my client hitting the first vehicle that had already stopped.  If I was not clear, my client was the middle car in a three-car pile-up. So, in essence, the insurance company for the at-fault company is denying fault for part of the car wreck.  So, back to the Yugo and how to protect yourself.

First, all my preaching about uninsured and underinsured coverage does not apply here as all vehicles involved were insured and my client was not badly injured. However, it just as easily could have applied. If my client had a surgery from this car wreck, I could see a situation wherein underinsured coverage on his own vehicle could come into play, even if the other driver was only accepting 50% fault for the wreck.

For example, assume the client has a $100,000 surgery and the other driver was only insured for $25,000.  If the insurance company is successful in asserting the 50% responsibility (based on the comparative fault issue I covered earlier), the potential liability for the at-fault driver would be $50,000.  However, even if their insurance company agrees to pay the policy limit of $25,000, there’s still $25,000 of medical bills remaining, not including the client’s 50% portion ($50,000 for comparative fault).  Therefore, a good lawyer would be making an injury claim against the underinsured motorist coverage for at least the other 25% of medical expenses.

So yes, to say it again, always have at least $100,000 per person of uninsured and underinsured motorist coverage on your motorcycle and car insurance.

What does come into play for this wreck is the collision coverage on my client’s own automobile insurance policy.  Since the at-fault carrier is unwilling to pay for all of the damage to my client’s vehicle, we can use that collision coverage to pay for the damage to the car and my client is only out his deductible. This way my client can get his car fixed and back on the road while I have time to potentially litigate the issue of fault.

What if he did not have this collision coverage?

Then we would be between a rock and a hard place because he has a car that needs repairs to be operational and yet, he has no way of paying for these repairs. To complicate matters, lawsuits wherein we are trying to prove to a jury that the other driver was at fault, usually last anywhere from 18 months to several years.

In essence, we would need time to prove the other driver caused the wreck and of course, the client does not have time because he would be without a vehicle.  So back to the original point which is, the better insurance you buy before the car wreck happens the greater tools you give a car accident lawyer to work with if an accident occurs.  After all, the Yugo will get you there, but it may not have been the best option in the long run.

For more information, listen to my Kentucky Auto Accident Podcast or watch some of my personal injury videos on the website.  Remember, you can always call me on my cell phone at (502) 609-7657.